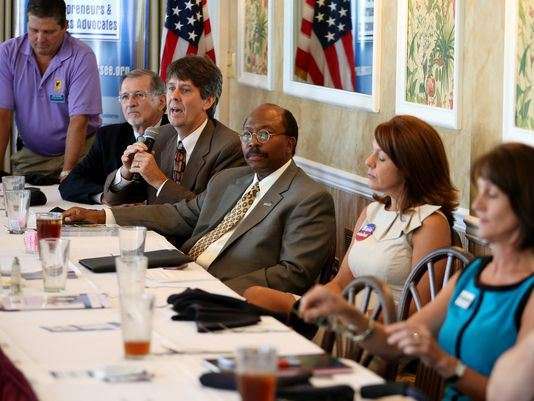 Tallahassee City Commission and Leon County School Board candidates fired questions at opponents during Tuesday’s near capacity forum hosted by the Network of Entrepreneurs & Business Advocates.

Roughly a month remains before the conclusions of the primary election.

Oropallo, who described herself as nervous as she has at previous public appearances, questioned why Richardson chosee to run for this year’s open seat instead of an open seat in 2012 “if you have such a burning passion to get back to the city of Tallahassee.” The position is being vacated by City Commissioner Andrew Gillum, who’s running for mayor.

Richardson disputed charges he’s a career politician leveled by Oropallo by questioning why she first filed to run for School Board before switching races. Riddle questioned Richardson’s campaign contributions and events he’s sponsored in Gadsden County.

NEBA, a group representing the business sector, also posed questions for candidates by its members. The nearly 100 in attendance raised issues that included improved public safety and more police officers, thoughtful government spending, a debate over development tax breaks and federal and state mandates on education.

Questions included whether candidates supported creating a new Community Redevelopment Agency district on North Monroe Street near Tallahassee Mall (similar to what’s already in place downtown and the south side/Frenchtown areas), where they struck a balance between development and environmental standards and if they supported a strong-mayor position on the City Commission.

“I think it’s a good way to get to know who’s running and what they are about,” NEBA Board President Terry Madigan said of the forum. “We had a pretty good crowd here today. … I think people are very interested because there are not a whole lot of local forums that people can go to and hear all of these things.”

Riddle said the city needs to return to basics and not make businesses jump through necessary hoops. Oropallo said she’d support a combination of approaches that focuses on permitting and local preference.

“We’ve tried that for a year. It went away because it got tangled around the axle with some of our other preference programs. I would seriously like to see that come back,” Miller said.

While Stewart agreed with Miller on supporting local preferences, he said he was befuddled by why the city’s local-preference policy hasn’t been fixed.

“Local preference was brought up a couple of years ago and it’s just fallen by the wayside. It requires leadership,” he said.

This article is reprinted with permission from the Tallahassee Democrat. The original article is here.