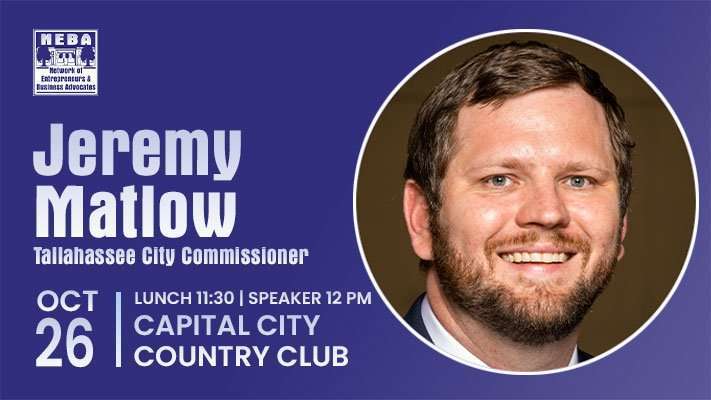 Join us on Tuesday, October 26 at the Capital City Country Club for a luncheon presentation by City Commissioner and Mayor Pro-Tem Jeremy Matlow. Commissioner Matlow will be the fourth city official to address our NEBA membership in 2021. NEBA recently heard from Mayor John Dailey on matters concerning the city and community.

Register for the luncheon to reserve your seats and encourage a friend to attend one of the best speaker programs across the Greater Tallahassee Area.

Raised on Tallahassee’s south side with a passion for the public good, Commissioner Matlow believes that citizens and neighborhoods should drive the priorities of City Hall. By bringing more people into the political process and advocating for the concerns of everyday people, Jeremy is committed to building a city that works for everyone through dedicated public service.

Commissioner Matlow helped lead the revitalization of Gaines Street and the All Saints District as President of the Gaines Street Community Association. He is the co-founder of Gaines Street Pies, a successful business he and a partner built from the ground up into an enterprise with eighty-five employees right here in Tallahassee. He was also appointed by the Mayor’s Office to serve on the Municipal Code Enforcement Board.

In addition to sitting on the CRA and Blueprint Intergovernmental Agency, Commissioner Matlow is a member of the Capital Regional Transportation Planning Agency, the Downtown Improvement Authority, and the Council on Culture & Arts.

Commissioner Matlow is married to Sarah and has two sons, Declan and Ethan. He was first elected to the office of City Commissioner in 2018 and will be running for re-election in 2022.

With so much new leadership in Tallahassee, it is important they know that NEBA represents hundreds of local citizens and business owners who believe a vibrant community must have and maintain a strong business sector. Our membership remains strong, but as always, there is strength in numbers, and we believe the best advocate is an informed advocate.

Online ticket sales how now closed. You may show up and pay at the door.