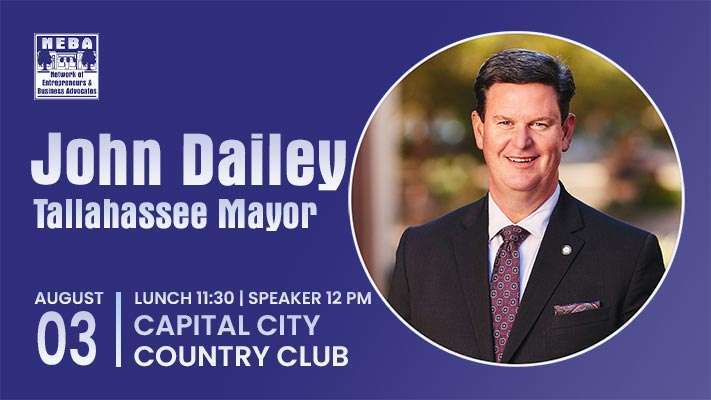 A lot is happening in the greater Tallahassee community, so NEBA welcomes Mayor John Dailey to give an update on development, public safety, the homeless, and many other public policies affecting our community. The mayor will address NEBA on Tuesday, August 3, at Capital City Country Club.

This will replace our regularly scheduled meeting, originally planned for July 27th.

BIOGRAPHY: Mayor Dailey has dedicated his professional life to building strong, vibrant communities. He has had public service in his sights his entire life. As the son of Dr. John Scott Dailey, the former Executive Director of the Florida Institute of Government and a former two-term Leon County School Board member, John could not have had a better role model to learn the value of just how effective quality leadership in government can be for our community.

He began his professional career working for the Florida League of Cities, representing over 400 municipal governments before the Florida Legislature and Administration. He also represented municipal governments across the nation before the U.S. Congress and Administration while working for the National League of Cities in Washington, D.C.

John received his bachelor’s degree in Political Science from Florida State University, where he served as President of the Student Government Association. He received his first master’s degree in Public Administration from FSU and went on to receive a second master’s degree in Urban and Regional Planning from the London School of Economics while serving as an Aide to Roger Casale (Labour – Wimbledon) in the British Parliament.

John returned to Tallahassee in 2005 and founded JDA Strategies, a research and development consulting firm focused on local governance. In 2006, he was elected to the Leon County Commission by the citizens of District 3 and was re-elected twice without opposition. He served as Chairman of the Leon County Commission twice (2010-2011, 2016-2017). John is a graduate of Leadership Tallahassee and Leadership Florida.

John was elected Mayor of the City of Tallahassee in 2018. John and his wife, Virginia, have two young boys, Tommy, and Henry.

Register today to reserve a seat at our Covid-friendly venue at the Capital City Country Club on Tuesday, August 3rd from 11:30 am to 1:00 pm.

Online ticket sales have now closed. You may show up and pay at the door.