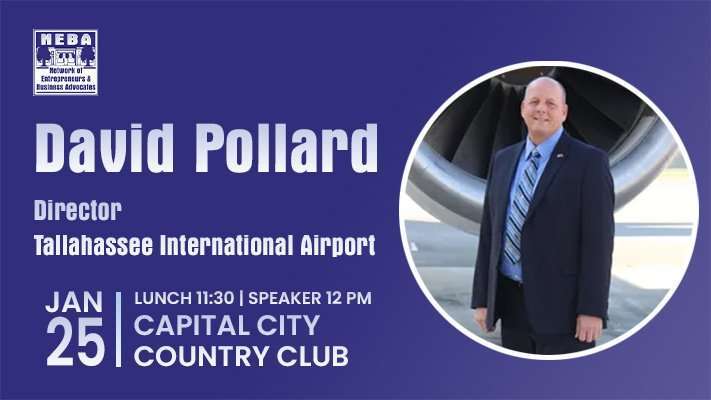 NEBA kicks off 2022 with what is sure to be another great year of programs by welcoming featured speaker and guest David Pollard, the director of the Tallahassee International Airport (TLH).

The Tallahassee International Airport is owned and operated by the City of Tallahassee with a staff of fifty-four and a $13.3 million budget. The future of TLH includes the development of an international passenger processing facility and foreign trade zone designation. TLH provides air service for the greater Big Bend region, drawing passengers from Florida, Georgia, Alabama, and beyond. Commercial air carriers include American, Delta, and Silver.

Pollard was appointed as director of the City of Tallahassee’s Aviation Department.in June of 2019. Pollard previously served as interim director and brings more than 26 years of experience in aviation to the position, which provides leadership and administrative oversight of the Tallahassee International Airport. In addition to his aviation operation experience, Pollard served this country through 22 years of honorable active duty and reserve military service in the United States Marine Corps.

David was recognized as the Air Carrier Airport Manager of the Year for the Federal Aviation Administration’s Southern Region. Under his leadership, TLH was named the Commercial Service Airport of the Year by the Florida Department of Transportation, and passenger traffic reached a 10-year high.

Pollard has also worked for the Daytona International Airport. He holds a bachelor’s degree in Aviation Business Administration from Embry-Riddle Aeronautical University in Daytona Beach, Florida, and lives in Tallahassee with his wife and two children, both in college.

Register today to reserve a seat for you and a guest at our Covid-friendly venue at the Capital City Country Club on Tuesday, January 25, 2022, from 11:30am to 1:00pm.

Registration is now closed. You may show up and pay at the door.