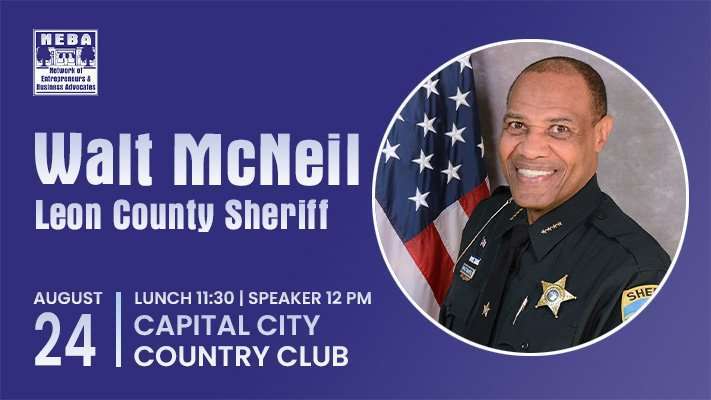 The next NEBA luncheon will host speaker Sheriff Walt McNeil on Tuesday, August 24 at the Capital City Country Club from 11:30-1:00. Be sure to register and attend our next luncheon to catch Sheriff McNeil’s presentation. He’ll be addressing many important elements concerning our community, including crime reduction and prevention.

Walter. A. McNeil was elected Sheriff of Leon County in November 2016. In his distinguished 40-year career as a public servant, Walter McNeil has led the fight against crime in Tallahassee, has been tapped to lead two state agencies under former Gov. Charlie Crist, and has advised the Obama White House and other governments around the globe on law enforcement strategies and tactics. From 2008-2011, his three years as Corrections Secretary, he put in place Florida’s first prison reentry programs, reducing the inmate recidivism rate by nearly 5%.

For 10 years at the helm of the Tallahassee Police Department, Chief McNeil was recognized for his progressive voice and his effective response to citizen concerns. His community policing efforts to control gangs, drugs, and juvenile crime earned him numerous honors, including the Tallahassee NAACP Humanitarian Award, Public Sector Business Person of the Year, and the United States DEA Award.

In 2012 he was selected to serve on the advisory group that met with Vice President Biden to discuss gun violence. As President of the International Association of Chiefs of Police, Chief McNeil traveled to foreign countries to discuss methods to combat terrorism, human trafficking, cyber-crimes, and other 21st century concerns that may impact global security and policing issues.

The Sheriff and his family are active members of New Mount Zion AME Church.

Online ticket sales have closed. You may show up and pay at the door.