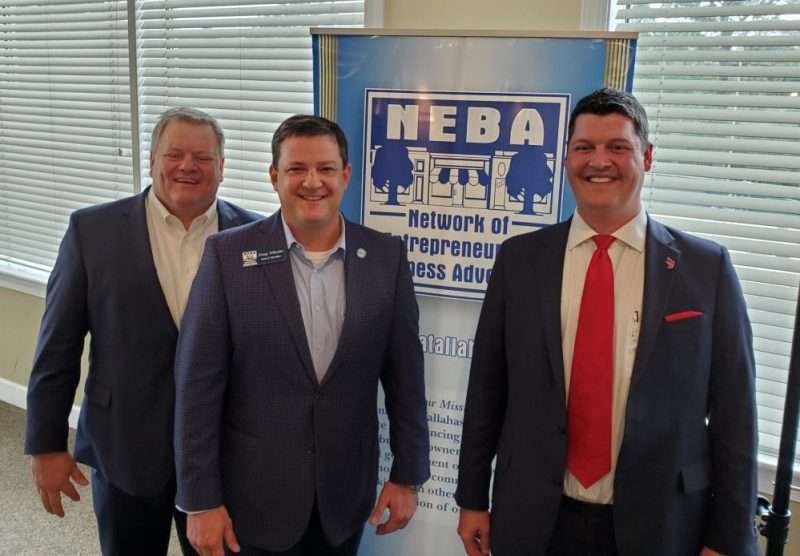 The Network of Entrepreneurs and Business Advocates (NEBA) held our monthly membership meeting on February 25, featuring guest speakers Scott Shalley, President & CEO of the Florida Retail Federation and Rob Weissert, Executive Vice President for Florida TaxWatch and the message was clear: Out of state businesses operating in Florida are essentially receiving tax exemptions giving them a competitive advantage over Florida-based businesses. Worse yet, Florida consumers can be left holding the bag when they’re subjected to tax bills from the Department of Revenue.

NEBA members learned the latest on the policies and politics surrounding a key business issue known by many as E-Fairness: Remotes Sales Tax Collection. The source of the problem is that as the online marketplace has grown and evolved, the tax code has not. It has taken the U.S. Supreme Court to rule and pave the way for states to apply a reasonable requirement that remote vendors collect sales taxes on sales to customers in their state – even if the vendor does not have a physical presence in that state. Unfortunately, Florida is one of two states in the nation that has failed to modernize its laws.

What does not make the headlines is the law already requires this tax to be collected, but it is the responsibility of the consumer to send the appropriate amount to the state after an online purchase where sales tax was not collected by the seller. As a result, evidence suggests that Florida is losing out on hundreds of millions of dollars each year from a lack of collection, which over the long term, could potentially be used to reduce another tax already imposed on Floridians. Moreover, since the burden is put on unsuspecting consumers, few even know they are responsible for remittance until they get a notice of audit from the Department of Revenue for owed taxes.

Legislation to update Florida’s tax code in 2020 has been mixed at best. In the Florida Senate, legislation (SB 126, sponsored by Senator Joe Gruters) has passed a few committees, but in the House, leadership has kept proposals (HB 159, sponsored by Representative Chuck Clemons) from even being heard in committee. Certain legislators are worried about the appearance of increasing taxes, which has unfortunately made the solution more politically driven, rather than policy-driven.

NEBA will continue to monitor this important business issue and work to keep our members informed as things develop.