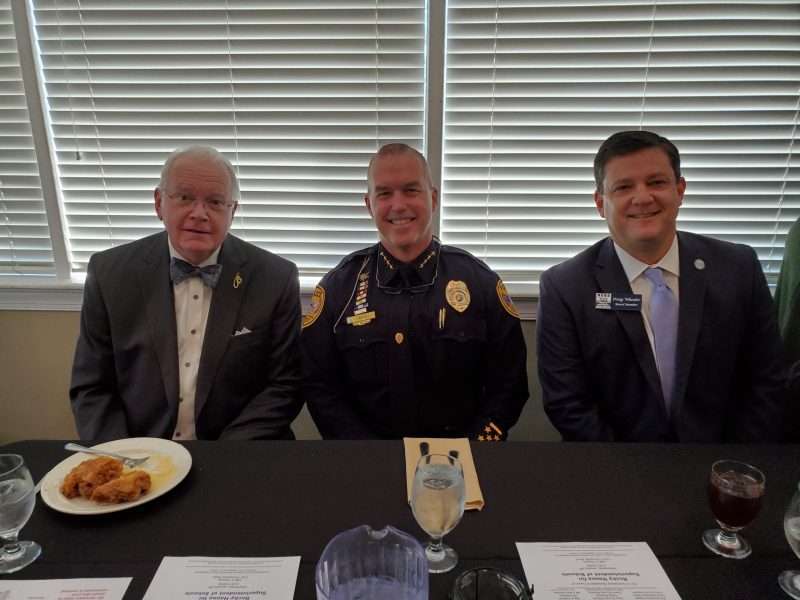 Before an impressive audience of more than 120 NEBA members and guests, Chief Revell shared his vision and proposed actions concerning the police department and our community. In his first three weeks, Chief Revell hired three deputy chiefs and has promoted four majors.  Chief Revell announced that he and the Police Benevolent Association signed a “historic” Memorandum of Understanding allowing the department to begin promoting sergeants and lieutenants.

Also, Chief Revell shared that the department has recently hired 14 new officers, but that there are still 38 positions left unfilled. He expressed that current hiring requirements are too restrictive, and added competition is tough with the Sheriff’s office to recruit talent across the southeast region. Revell explained he was looking at addressing some of the standards in order to give TPD every opportunity to recruit strong talent.

Part of Chief Revell’s vision is to open police precincts over the next 5-15 years. This explains, in part, why he is beefing up his command staff now in order to have a greater presence and continuity of protection across the city.

Chief Revell also announced the soon to be Citizens Advisory Committee. It will not be an oversight entity, but rather a conduit of two-way dialogue between the police department and roughly 15-20 community leaders of the committee.  Applications can be found on the police website.

Last, Chief Revell said that record sharing between TPD and the LCSO is unlike ever before, particularly the inclusion of video.  This will keep the flow of information and records nearly in real-time and augment investigations.

Chief Revell is committed to bringing law enforcement together with the community at levels never seen before. He will rely upon his long-standing relationships and commitment to honesty and transparency to ensure that we all are working together “for the betterment of our community.”