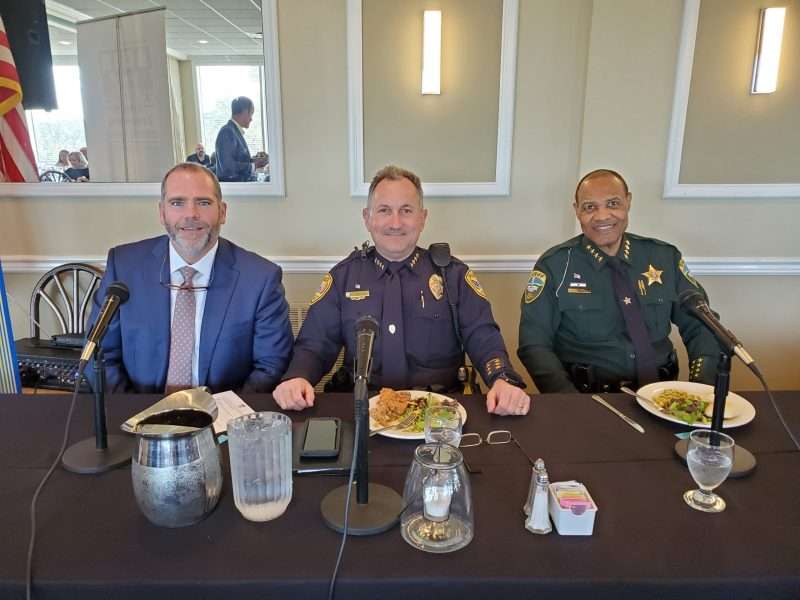 The topic was Crime in Tallahassee and the panelists were Sheriff McNeil, Chief Outlaw, and State Attorney Campbell. Each provided brief opening comments on the status of crime in Tallahassee and efforts underway to reduce it, followed by questions and discussions on topics ranging from a needle exchange program, mental illness, human trafficking, marijuana, LivePD and community support and involvement.

When asked about solutions, Chief Outlaw responded that unfortunately many crimes are preventable, notably auto burglaries of unlocked vehicles, where high-end electronic devices and firearms are the top targets. Obviously firearms in the hands of the criminal element only makes things worse. Campbell suggested community-wide economic vitality will provide organic solutions, “get these people jobs.” Campbell added that education and training are the key to make sure there are skills to obtain sustainable employment and income. Sheriff McNeil agreed, stressing that solutions to many social issues will also bring about solutions to certain crime issues, and economic opportunities are key among them.

All three guests opposed the Marijuana Legalization Constitutional Amendment likely headed for a state-wide vote in November of 2020. Shared concerns were expressed over the potential for unintended consequences and the possibility of exacerbating other issues, both health and criminal. However, Campbell addressed a question regarding his decisions to implement the Civil Citation program for certain marijuana offenses and to not prosecute certain cases based on the lack of testing capabilities by suggesting it was a matter of limited resources and how to best utilize them for the greatest good.

Sheriff McNeil and Chief Outlaw acknowledged that their entities were not staffed at optimal levels, a problematic trend seen nationally due to changes in community impressions, occupational hazards and in many cases, low pay, particularly in a strong economy.  This has led to changes in hiring qualifications and procedures in order to be competitive when recruiting new officers.

There was consensus that an engaged community still plays a critical role in combating crime. Whether through getting to know neighbors and “knowing when something isn’t right,” being concerned enough to say something when seeing illegal activity or helping to reduce crimes of opportunity with something as simple as locking your car doors at night.

Remember the 9 P.M. Routine – Lock your doors and secure your valuables. Remove all firearms. And if you SEE SOMETHING, SAY SOMETHING!