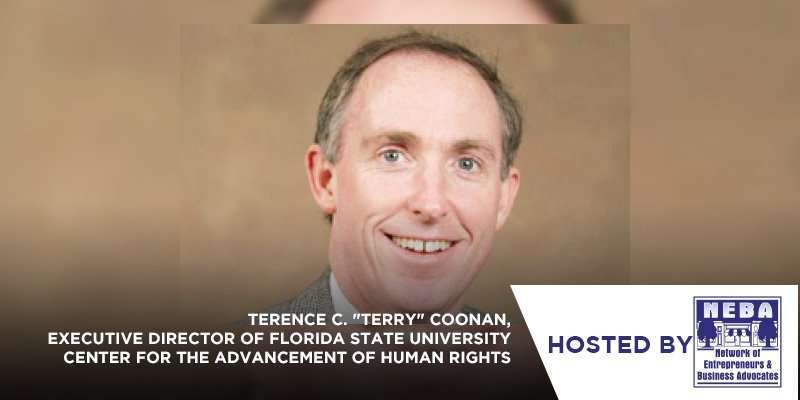 Our topic was Human Trafficking and the speaker was Terence C. “Terry” Coonan,  the executive director of Florida State University Center for the Advancement of Human Rights as well as an Associate Professor of Criminology at FSU.

Coonan explained that Human Trafficking is modern-day slavery, involving forced commercial sex or forced labor.  Florida is a major hot spot, the #3 state in the country; there are 21 million people worldwide held in slavery today.

Human Trafficking is not something that just affects other countries, states or cities.  It is up and running in Leon and surrounding counties, and smartphones are the most prevalent recruitment device – so it affects all demographics.

With sex trafficking – the largest pool of victims locally are young women who are US citizens and come under the control of pimps who present as their boyfriends, take them out of their homes after school and groom them.  Girls are recruited from malls, group homes, and especially on social media.  Family members or acquaintances are sometimes the “pimps” – in Tallahassee, a Mother was using her 13-year-old daughter to obtain drugs.

Across the state, Sex Trafficking takes the form of Agricultural Brothels, located next to migrant farm camps & Illicit Massage Parlors, both of which use Korean/Chinese or Russian taxi services to transport the girls around the state.  The girls in question, who were brought to the US with promises of good jobs, or schooling, are groomed and intimidated within about 2 weeks, and then never work off the debt they are told they owe for transport here.

Labor trafficking involves nail salons, strip clubs, hotels/resorts, restaurants, and other businesses, as seen recently in the news. Often sub-contractors offer cheap labor to these establishments, and if management looks the other way the slave laborers work in plain sight.  There are Russian crime families in the Panhandle bringing Russian girls to the US promising college degrees and putting them to work as slave labor for businesses.

There is some good news in that the Legislature changed Florida law so that if force, fraud or coercion can be proved, convictions can be obtained.  Unfortunately too often the “Johns” who are the reason sex trafficking exists and the business owners who use slave labor are not prosecuted or get light sentences, which leads to continued demand for these terrible crimes.

As business owners we should be aware that this is happening in our town and our state.  Scrutinize sub-contractors, especially if they come in with extremely low bids for manual labor.  There are opportunities to mentor trafficking victims, by contacting slaveryfootprint.org or the Big Bend Human Trafficking Coalition.  All businesses should also post the National Human Trafficking Hotline number prominently in their business & public restrooms:  1 (888) 373-7888.