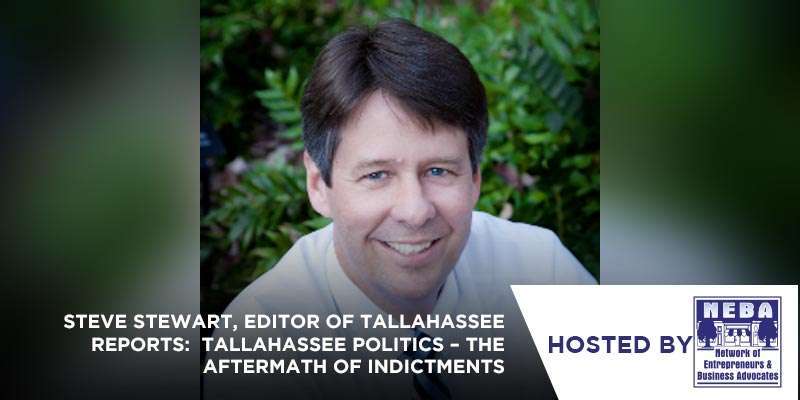 By Patrick Slevin, NEBA Board Member

Tallahassee Reports Publisher Steve Stewart spoke at our July luncheon, giving his analysis of the after-effects of indictments in City of Tallahassee Government. The FBI investigation was at the forefront of members minds. Steve was sure to clarify that anyone who is under investigation is presumed innocent.  Stewart proceeded to discuss how the initial subpoena and indictments have made a lasting impact on our community, even if there are no further arrests or convictions:

Members asked questions to include the search for a new police chief, and whether Stewart thinks the current search committee is representative of our community.  Stewart was non-committal on that but agreed there should be a Citizens Police Board & Electric Utilities Oversight Board.  Steve also raised concerns of a national trend that’s affecting our community, which is the rise of divisive, national debates here at home.  He reminded us that you can find the truth of a matter by researching and viewing multiple media sources, not just those that agree with your viewpoint.  It was discussed that trends in local government corruption may be the product of newspapers across the nation laying off staff and scaling back resources (not enough journalists for oversight).

Many members were subscribers of Tallahassee Reports and NEBA thanked Steve Stewart for keeping diligent in his community coverage that now will expand with the addition of several news interns in the fall.